Juneteenth for Mazie, by Floyd Cooper 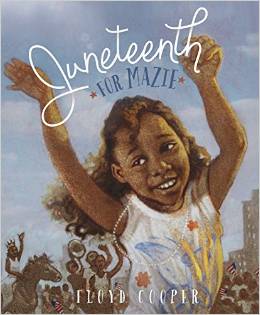 I am adding an extra post for this month, because my heart hurts, and in some small way writing this makes me feel better. It is going to be longer than most of my posts here, because what I want to say about this book needs some explanation.

Like all decent people, I was heartbroken by the news of the racist shooting at the Emanuel African Methodist Episcopal Church in Charleston, South Carolina. I do not hide this sort of heartbreak well, and this time, my oldest daughter was old enough to notice something was wrong, and ask me what it was. I told her the truth.

She is old enough to hear these sorts of truths, but as I explained in my post about The World According to Humphrey, she is also a child who struggles with tension in her books and movies. She loves to read biographies, but recently stopped reading a biography about Harriet Tubman because it was too scary for her. Fair enough. Harriet Tubman’s life was scary.

I struggle with how to teach her about the injustices in this world without overwhelming the strong sense of empathy that makes her so sensitive to danger in what she reads. I don’t want to wear a callus over that empathy, because frankly, it is a good thing to feel strongly about other people’s suffering. However, I also can’t let that become an excuse to avoid seeing other people’s suffering.

Because we are white and well-off, I have the extraordinary privilege to get to think about how to teach her about most injustices instead of having them be an obvious part of the fabric of our everyday lives. With that privilege, though, comes the responsibility to actually do the teaching. I know from my own education that relying on the schools to do this will result in a somewhat haphazard understanding of the facts.

My parents did not leave this entirely to the schools, either, but still, my understanding of the facts of history remains more haphazard than I would like, particularly when I am faced with a young face turned up at me, expecting an answer to a question. I am working to correct that, but in the meantime, my daughters are growing up and I cannot postpone this important part of parenting until some hazy time in the future when I am “ready” to discuss difficult topics. As a parent, you discuss these topics when they come up, and you do the best you can.

One of the things I do when I’m faced with more than I feel able to explain in my own words is turn to books. And that is what I did tonight. After I told my daughter what had happened and why I was sad, I decided to tell her about tomorrow, which I have only recently learned is celebrated in some parts of the African-American community as Juneteenth. (I told you my understanding of the facts of my own history remains somewhat haphazard.)

So I told my daughter to get her Kindle and search in the book store for “Juneteenth,” and then look and see if any of the books she found looked good to her. She picked Juneteenth for Mazie, and I bought it for her. She read it, but then it was time for our bedtime routine, and I didn’t get to read it until after she was in bed. It is a good book. The story is simple, and explains the holiday and the reason for it at a level that would work for a child far younger than eight. I’ll probably read it to my 5 year old tomorrow. Still, it is a good opening for a discussion with an 8 year old, and she and I can have one in the car tomorrow, on our way to her summer camp. She often raises questions with me on our way to school or camp. Tomorrow, I will turn the tables.

This isn’t a holiday I feel my family can really celebrate- it is not ours to claim. But it is certainly one I think we can observe, perhaps by talking a bit about Black history in America, and how simply ending slavery was not enough to make things right, and how even 150 years later, we still have much more to do.

This book does a good job of setting the stage for that discussion. I think I’ll buy a strawberry soda for us to share while we talk a little more .

Buy it at:
Amazon